We arrived at the site around 10:30 AM. One of the first things we noticed about the site was the horrid stench. One of my fellow interns described it as smelling like “stale beer”, and I couldn’t disagree with him. So we made our way down the slight hill and entered an area that was densely covered with trees and shrubs. Mixed within those trees and shrubs was an abundance of trash, like I had never seen before. Name any sort of item and there is a high probability that we came across that item. Along with the high variance of items came even more recyclable bottles. I would say there was anywhere between 100 to 200 bottles found, most of which were beer bottles or alcohol bottles (someone has been partying a little bit too hard lately). We maneuvered our way through the trees and picked up as much trash as we could. In an hour, we picked up enough trash to completely fill up two 40 gallon garbage bags. In total we picked up 30 gallons of trash and 45 gallons of recyclables. 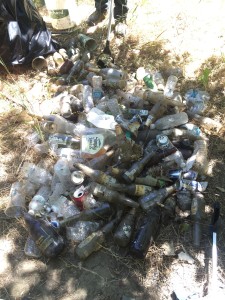 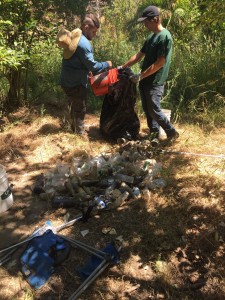