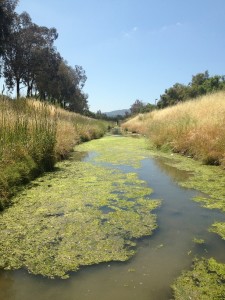 The Livermore-Amador Valley is currently home to many species of native and non-native fish.  Fish are an important part of the ecosystem; not only are they a valuable food source for birds and other predators, but many species eat the annoying insects we dislike, such as mosquitos. However, due to urbanization in the Valley, many of our natural streams have been converted to treeless flood control channels.  These degraded urban streams tend to be characterized by non-native grasses, sparse tree cover, and are often polluted and murky. In other words, they tend to be poor habitat for fish!

Fortunately, many of our native fish have adapted to withstand varying degrees of water quality, and continue to subsist within our urban streams. Sacramento sucker, California roach, Hitch, and Threespine stickleback are a few native species that are currently very prevalent in our local urban streams.  All of these species can tolerate high water temperature and low dissolved oxygen, and therefore are well adapted to altered environments, such as flood control channels and ponds.  However, not all native fish are so adaptable, and some species are now rare or extinct in the Valley due to competition with non-natives and habitat loss. For example, Sacramento perch used to be common in the Arroyo de la Laguna, but is now possibly extinct in the watershed due to competition with carp. 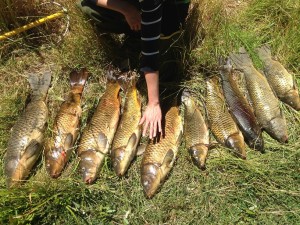 Many non-native fish also live in our streams, competing with and sometimes preying upon smaller native species. Common non-natives include Large-mouth bass, Green sunfish, Common carp and Mosquitofish. These widespread non-native species tend to be very tolerant of water quality, and easily survive in urban streams along with the locally adapted natives. Most non-native species have been purposely introduced into our streams and lakes, for a variety of uses. Some are stocked in lakes for fishing, like the Large-mouth bass; others, such as Mosquitofish, are added as biological control for mosquito larvae.

Eventually, when the oak woodland grows tall and the riparian trees shade the creek, the Stanley Reach will provide high quality habitat for fish, other wildlife, and, of course, people!