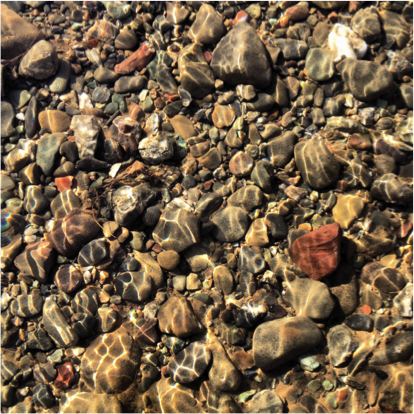 As of today, January 7th, we’ve received just over an inch and a half of rain in the Livermore valley area. The least rain the region has ever seen, since records began, is 6.4 inches (water year 1976-77). While it would certainly be exciting to have a water year like 1983, when we received over 32 inches of rain—over twice the average rainfall, which is about 14 inches—it doesn’t look like that’s going to happen.

We’re well below average for the water year all over California, and we’re feeling its absence at the Stanley Reach project. Luckily, acorns simply wait for the rain to start falling before they sprout radicles and send their taproots down into the earth. It’s harder with small container plants, which respirate and thus must have adequate moisture until they are considered more or less established after the spring rains cease.

While we will be planting container stock at Stanley in the spring—species like bigleaf maple, white alder and willow—we’ll be planting them near the water, where they will receive adequate moisture via groundwater even if the water year is bad. 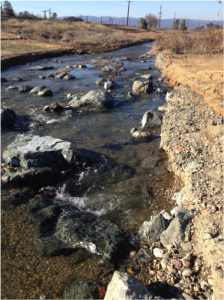 Wait, you’re wondering, why would there be plenty of water in the channel if there has been poor rainfall? It’s because the Arroyo Mocho is fed nearly year-round by the South Bay Aqueduct (SBA) for groundwater recharge in the Valley. Arroyo Mocho is what’s called a “losing stream”, which means it flows through a gravelly, porous geology, causing channel water to seep down into the aquifer rather than flowing over it. In contrast, gaining streams often gain from the surrounding groundwater. Water consumers across the valley rely on groundwater recharge for their water supply.

This also means that the formerly ephemeral (flowing only after storms) Mocho can now support a greater number of riparian plants than it would have before it was set up to receive the SBA water. So we’re actually building a type of riparian habitat at Stanley that was likely never there before. Stanley Reach is just one example of using changed environmental conditions to benefit both nature and people.